Background: Although classically described as a noninflammatory disease, recent evidence suggests that chronic inflammation may play a role in keratoconus pathophysiology. Continued eye rubbing is well established on ectasia development, taking part in the “two-hit” hypothesis, which combines the concept of intrinsic biomechanical susceptibility and external stimuli decompensating the structural integrity of the cornea.

Aim and objective: To describe a case of very asymmetric bilateral keratoconus requiring different approaches on both eyes.

Case description: A 14-year-old patient with a history of atopy and intense eye rubbing was referred for a cornea consultation because of low vision accompanied with pruritus on both eyes and pain on the left eye. Corneal hydrops was present on the left eye. A diagnosis of grade II keratoconus was established for the right eye. Distance-corrected visual acuity (DCVA) was 20/70 in the right eye and count fingers at 1 meter in the left eye. After 1 month of avoiding eye rubbing, topical mild steroids, and anti-allergic prescription, the patient referred significant improvement in both eyes. DCVA was 20/30, and flattening of 2.5D in the anterior curvature was noted in the right eye. Three months later, ectasia progression was detected in the right eye, and transepithelial cross-linking was performed.

Conclusion: In the presented clinical case, avoidance of eye rubbing and topical anti-inflammatory drugs were followed by spontaneous partial regression of the ectasia, delaying the necessity for a more invasive treatment. When progression was documented, transepithelial corneal cross-linking was effective in halting disease progression, with topographic stability for more than 6.5 years follow-up period.

Clinical significance: Avoidance of deleterious factors like eye rubbing in keratoconic eyes is crucial for clinical stabilization or even improvement. Anti-inflammatory therapy may play a role in ectasia stability.

Keratoconus is classically described as a bilateral and asymmetric ectatic corneal disease.1 The management of the disease has been the subject of substantial evolution in the last 20 years, as penetrating keratoplasty is no longer the mainstay of therapy. The development of therapeutic methods such as intracorneal ring segments, corneal cross-linking, phakic intraocular lenses, and lamellar keratoplasty has allowed for the design of structured therapeutic algorithms, according to the stage of the disease and risk of further progression, among other factors.2–4 Biomechanical aggression such as eye rubbing, blunt trauma, and laser ablation may be responsible for corneal structural decompensation, depending on the tissue’s inherent susceptibility.5,6 Although classically described as a noninflammatory disease,7 recent evidence suggests that sustained inflammation may play a role in keratoconus pathophysiology.8,9 Relevant studies have demonstrated the benefit of transepithelial corneal cross-linking (TE-CXL) in slowing ectasia progression and improving visual acuity.10,11 Advanced keratoconus may progress to acute corneal hydrops, with subsequent corneal scarring and a decrease in visual acuity.12,13 The authors report a case of very asymmetric bilateral keratoconus.

A 14-year-old patient presented to the Instituto de Olhos Renato Ambrosio (IORA, Rio de Janeiro, Brazil) with complaints of pruritus and red-eye bilaterally and pain in the left eye. The patient mentioned a long-time blurred vision in both eyes and a habit of intense eye rubbing. Distance-corrected visual acuity (DCVA) was 20/70 in the right eye (–0.50 –2.25 * 155) and “count fingers at 1 meter” in the left eye. Slit-lamp examination showed engorged tarsal vessels on both eyes, suggesting allergic ocular surface disease (Fig. 1). Additionally, central stromal edema with overlying epithelial microcystic edema could be seen on the left eye (Figs 2 and 3A, B). Intraocular pressure measured with the Ocular Response Analyzer™ (Reichert Ophthalmic Instruments®, New York, USA) was 17 mm Hg in the right eye and could not be measured on the left eye due to edema. Corneal tomographic analysis (Pentacam™, OCULUS®, Wetzlar, Germany) revealed inferior corneal steepening along with thinning in the right eye (Fig. 4A). This ancillary test was not possible to perform in the left eye due to the severe corneal edema. The diagnosis of bilateral keratoconus with acute hydrops on the left eye was established. The patient was medicated with Alcaftadine 0.25% (Lastacaft®) on both eyes and Loteprednol etabonate 0.5% (Lotemax®) plus Timolol 0.5% (Istalol®) on the left eye. Monthly monitoring was scheduled due to the risk of ectasia progression, and the patient was given a strong recommendation to avoid eye rubbing. 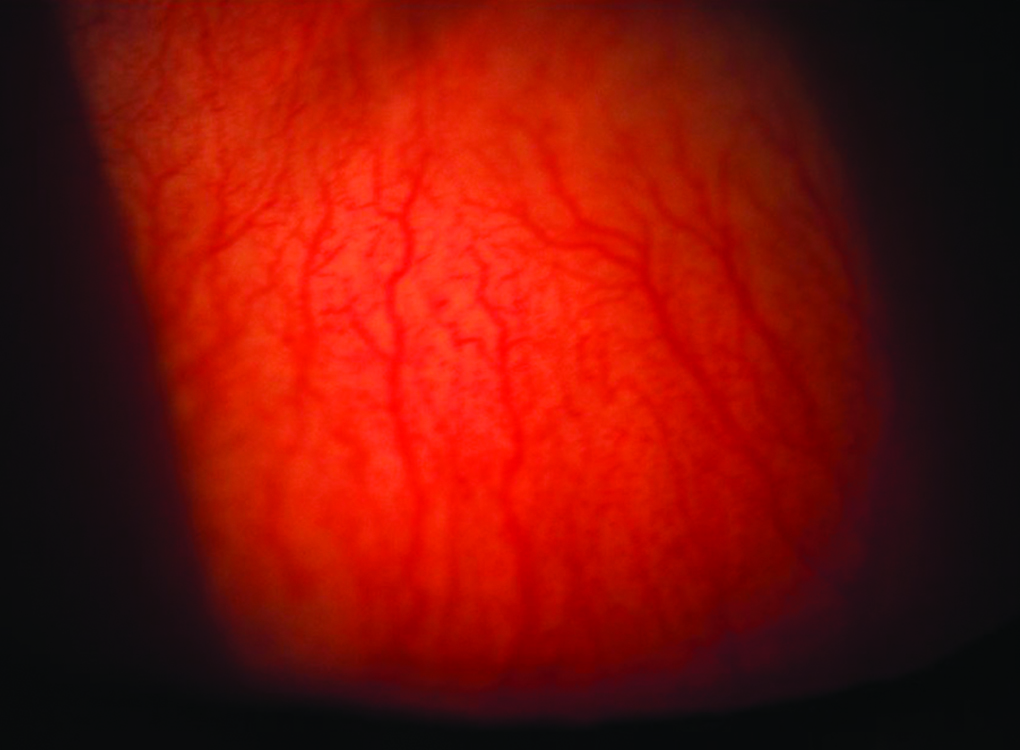 Fig. 1: Photograph of the superior tarsal conjunctiva of the left eye, showing micropapillae and engorged vessels 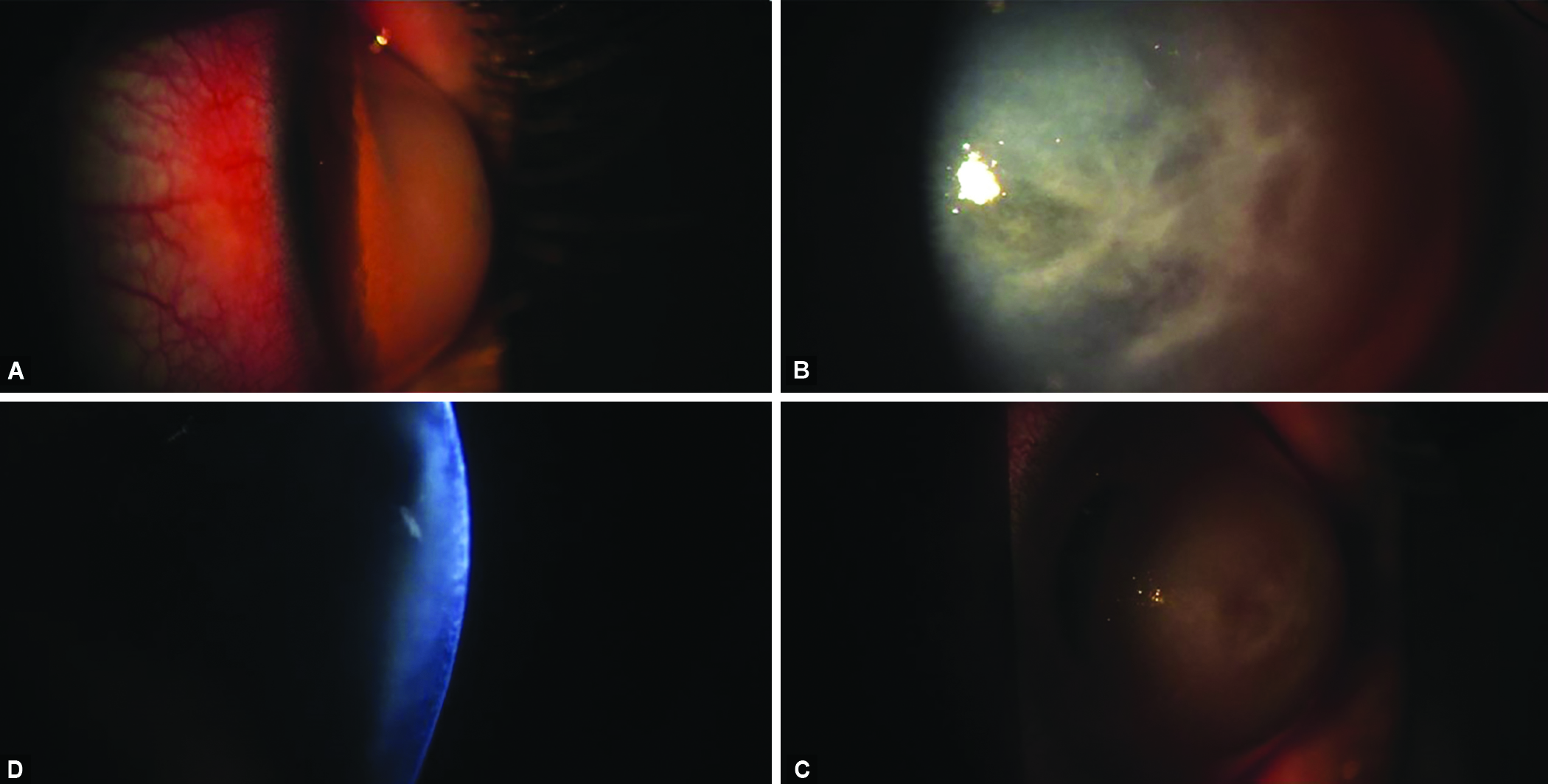 Figs 2A to D: Slit-lamp images of the left eye at presentation. Note the ciliary injection and marked stromal edema along with increased corneal thickness 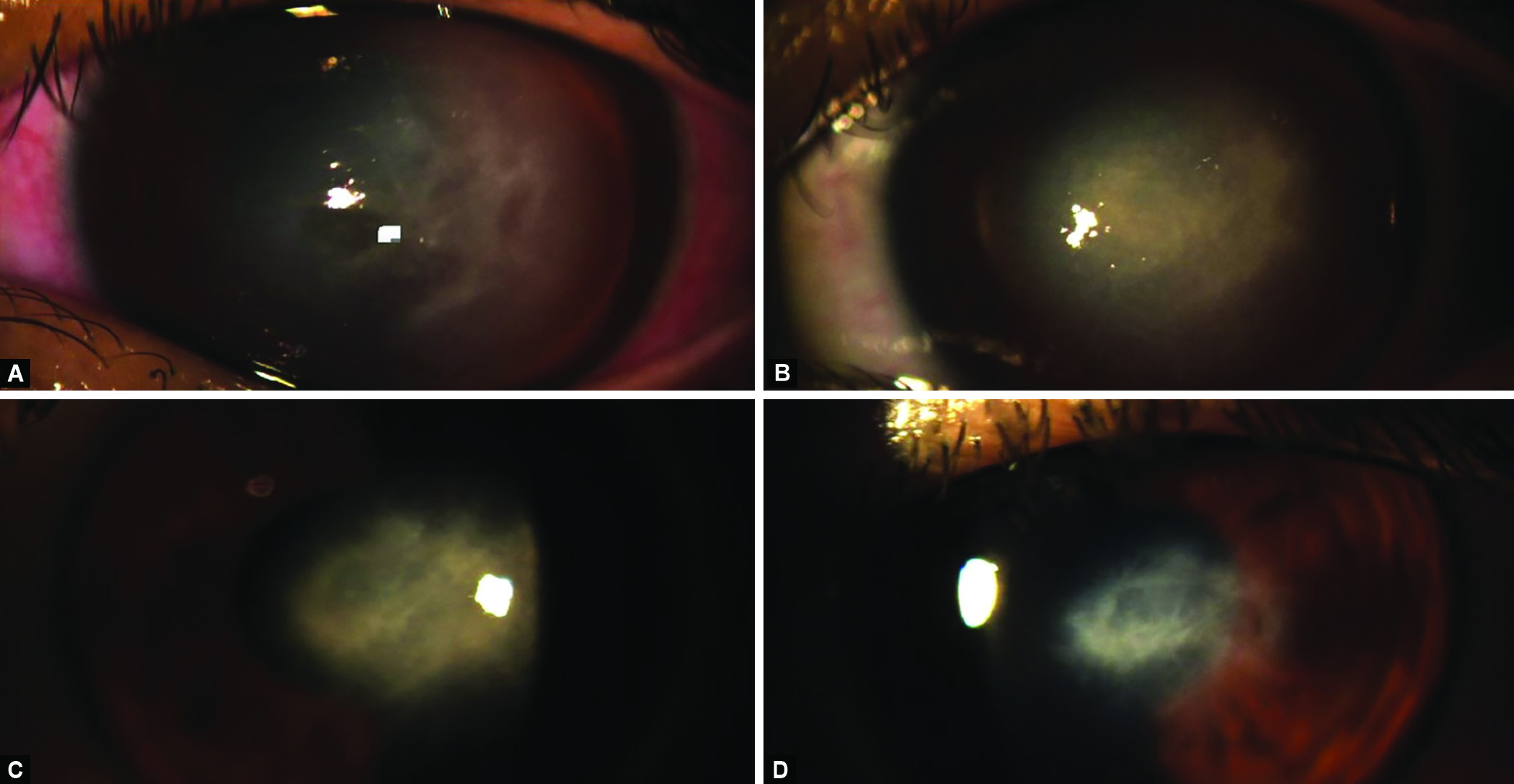 Figs 3A to D: Slit-lamp images, left eye. Progressive decrease of corneal edema after conservative treatment. (A) At presentation; (B) After 1 month; (C) After 2 months; (D) After 5 months 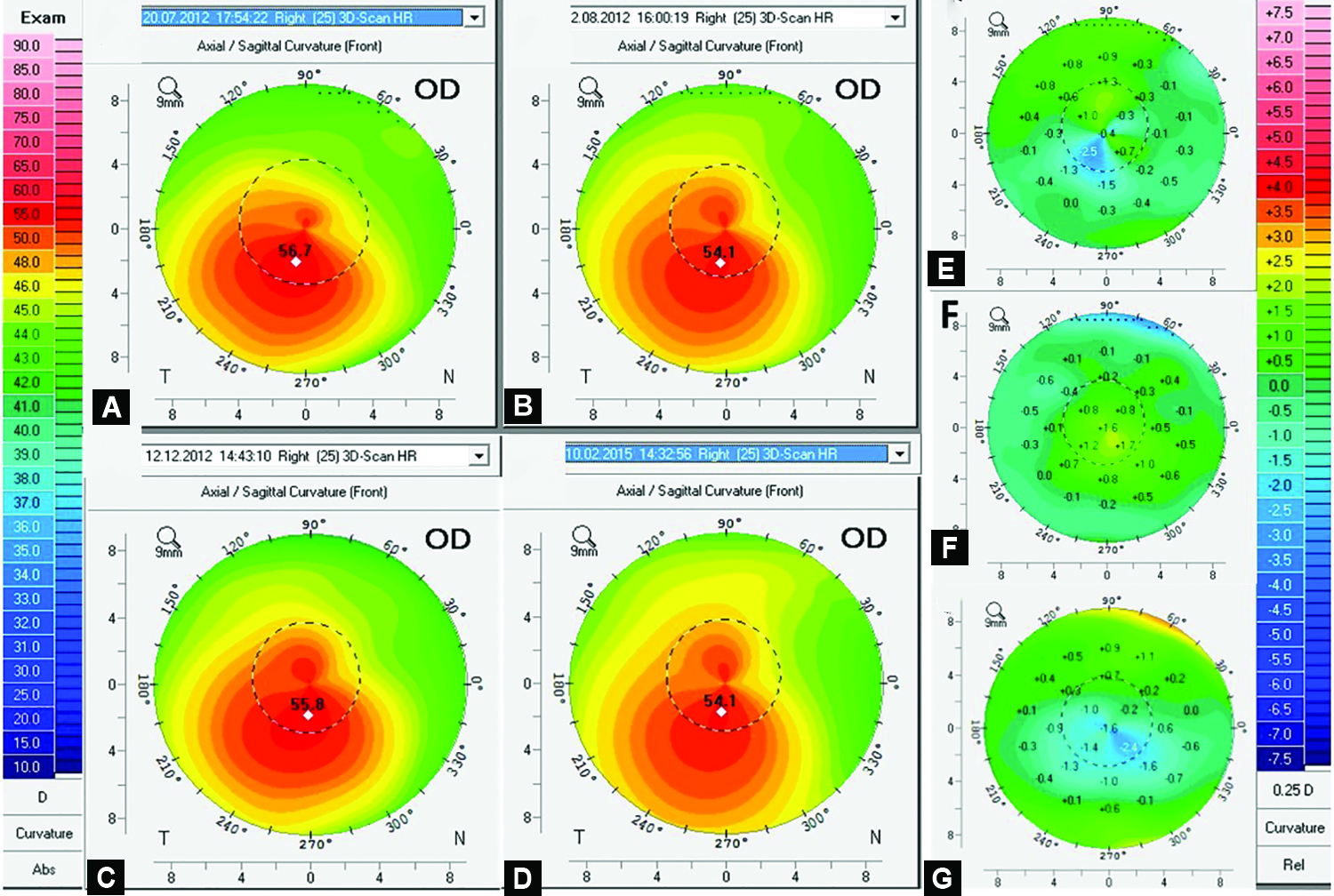 Figs 5A and B: Scheimpflug images of the left eye: (A) At presentation; (B) After 2 months of conservative treatment of corneal hydrops, showing decrease in corneal edema, thickness, and anterior curvature profile

Five months from the first observation, DCVA on the right eye had decreased to 20/70, while the left eye improved to 20/70, as corneal edema was now residual, and a fibrotic scar remained. Despite the significant clinical improvement on this eye, a break and free flap of Descemet’s membrane (DM) could be identified using anterior segment optical coherence tomography (AS-OCT) (Optovue® RTVue™, Fremont, USA) (Fig. 6). Ectasia progression was confirmed on the right eye, with 1.7D of steepening in the anterior curvature map (Figs 4C and F).

Fig. 6: AS-OCT image of the left eye, 5 months after presentation. A free flap of DM is still visible, even as corneal edema and visual acuity improved

Transepithelial cross-linking was performed consecutively on the right eye to halt ectasia progression. For this procedure, we used the ParaCel™ riboflavin solution, which is composed of 0.25% riboflavin, methylcellulose, hypotonic sodium chloride, and benzalkonium chloride. We also used the KXL™ System (Avedro®, Waltham, USA) for the ultraviolet type A light (370 nm) exposition, following the accelerated protocol (9 mW/cm2 for 10 minutes).

Twenty-seven months post-TE-CXL, the DCVA on the right eye had improved to 20/20. The anterior curvature map displayed a flattening of 1.7D (Figs 4D and G) in the central area. Specular microscopy showed unremarkable findings in the endothelial cell count and morphology. At that stage, visual acuity on the left eye had improved to 20/40, as stromal haze decreased and an oval, well-defined defect on DM was present (Fig. 7). 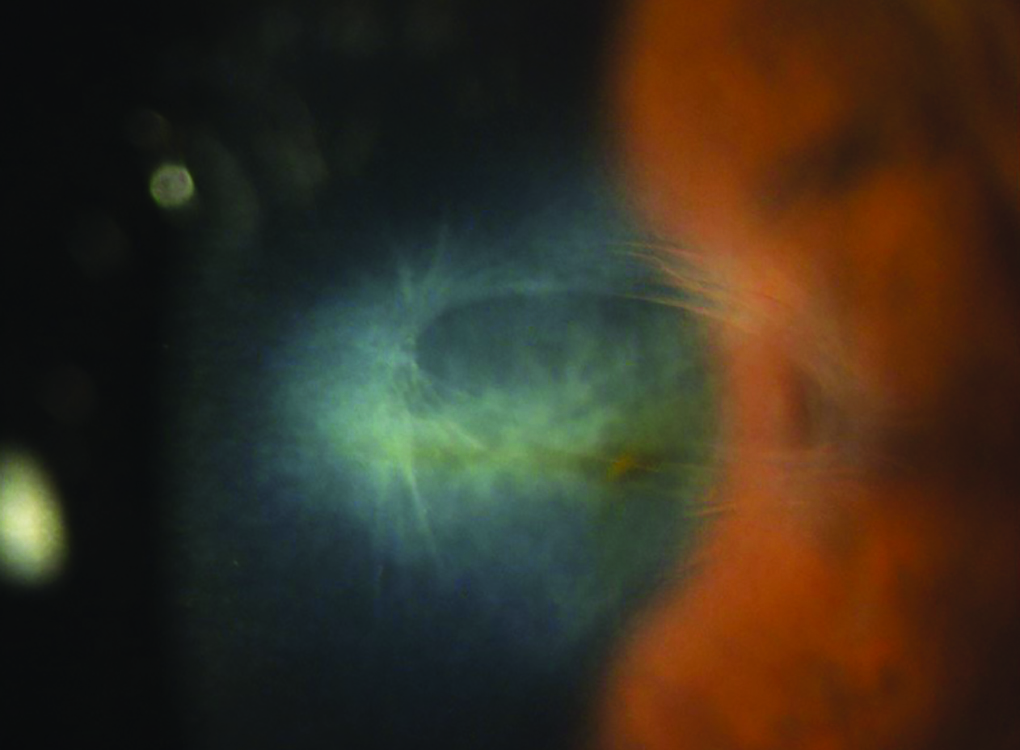 Fig. 7: Left eye, approximately 32 months after acute presentation of corneal hydrops. A break in DM is still visible, as well as stromal haze and an iron deposit line

After 4 years and 7 months from the presentation, the Belin ABCD staging system shows no clinically relevant progression in both eyes (Fig. 8). In the long-term follow-up, more than 6.5 years after the procedure, the right eye maintained visual and tomographic stability and the left eye had consistent resolution of edema with a residual stromal scar. The DCVA was 20/30 in the right eye and 20/40 in the left eye. Anterior corneal curvature maintained stable, with an overall decrease of 2.1D in the right eye and 40.9D in the left eye, from the first observation (Figs 9 and 10). 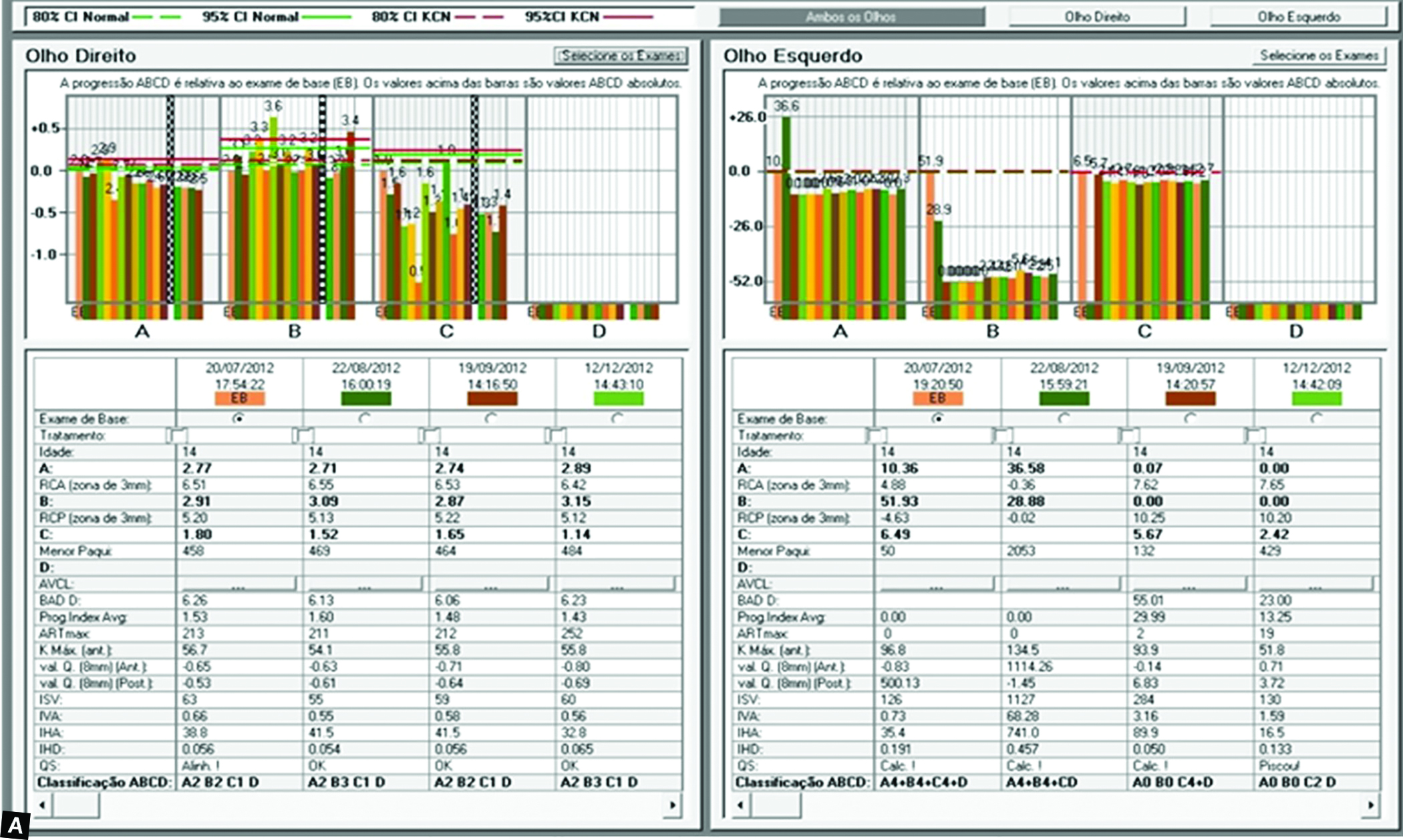 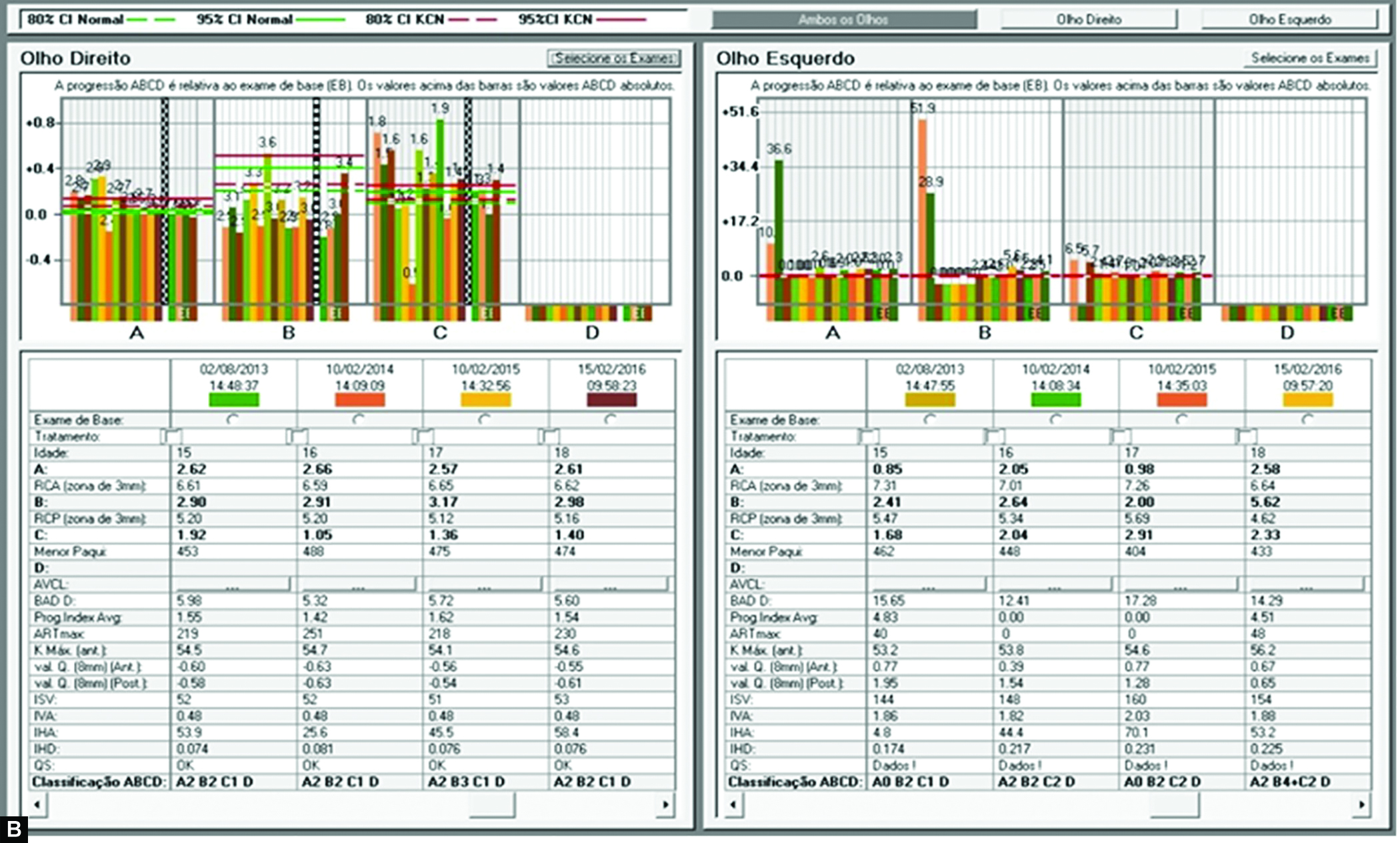 Figs 8A and B: Belin ABCD staging system

Figs 9A to F: (A to D) Anterior axial curvature maps (Pentacam®). (A or B) End of follow-up; (C or D) At presentation; (E or F) Differential maps between presentation and 79 months follow-up 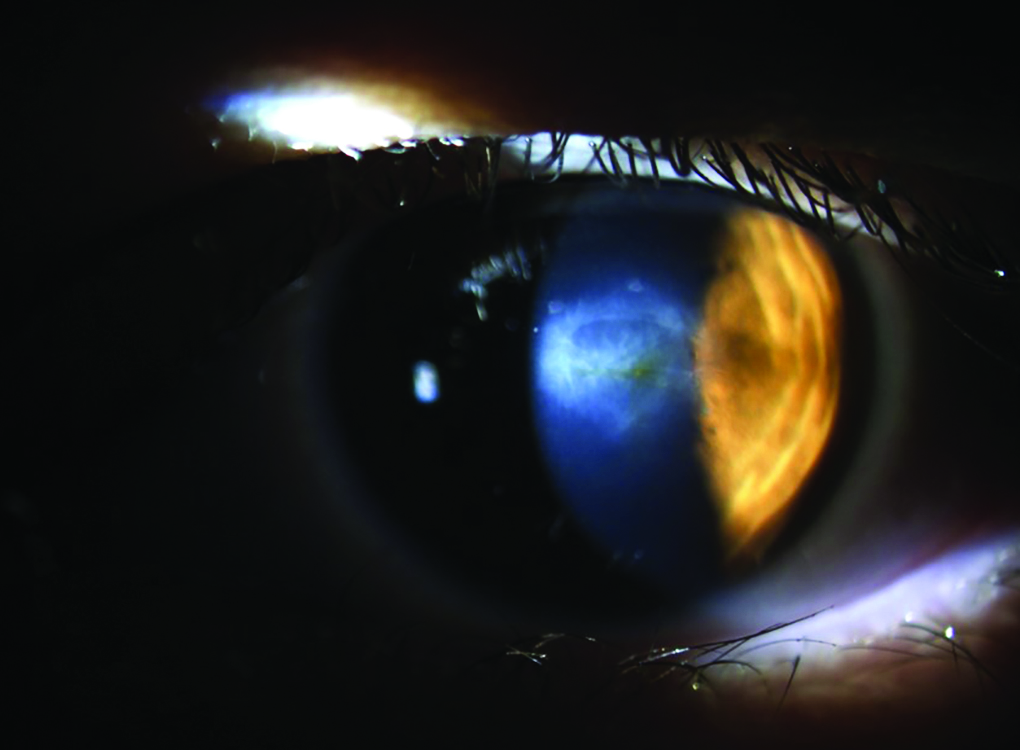 Current diagnostic methods allow for precise assessment of ectasia stability or progression, which is crucial for the adequate management of the disease.14 This report describes a clinical case of bilateral keratoconus, featuring different stages of the disease in each eye and therefore requiring distinct therapeutic approaches. The role of continued eye rubbing on ectasia development is well established.6 The “two-hit” hypothesis combines the concept of intrinsic biomechanical susceptibility and external stimuli that decompensates the structural integrity of the cornea.5 The present clinical case revealed a partial and spontaneous ectasia regression after eye rubbing cessation and topical anti-inflammatory medication. Although classically described as a noninflammatory disease, recent evidence suggests that chronic inflammation may play a role in keratoconus pathophysiology.8 Shetty et al. demonstrated a decrease in anterior keratometry readings in keratoconus eyes after topical cyclosporine a therapy.9 Similar to this finding, the described topographic improvement on the right eye after topical antihistamine and steroid drugs might be partially due to a change in the pro-inflammatory environment, along with decreased trauma due to reduced eye rubbing. In this sense, it is of utmost importance the advent of consistent campaigns like the Violet June,15 trying to overcome the lack of information about the disease, raising public awareness about keratoconus, including the dangers of eye rubbing and repeating it until the message becomes a cultural legacy.

Transepithelial cross-linking has shown the ability to promote ectasia stability and improve visual acuity, although the magnitude and duration of the effect are still under debate, specifically when compared to epithelium-off modality.16 In this clinical case, TE-CXL was an effective and consistent treatment for an earlier stage of the disease, as shown by visual and topographic improvement and maintenance throughout more than 6 years follow-up period. Therefore, we believe that TE-CXL should be recommended as a primary approach for less advanced cases of the disease, especially when the DCVA is 20/30 or better, considering a more favorable safety profile.17

Acute hydrops is characterized by corneal edema due to fluid penetration through a break in the DM and is followed by acute onset of decreased vision, pain, and photophobia. Although spontaneous resolution usually occurs between 2 and 4 months after onset, different strategies have been advocated to decrease the duration of the symptoms and occurrence of further complications such as infective keratitis and corneal vascularization. The injection of intracameral gas promotes faster attachment of DM, although no clear benefit in terms of visual acuity or rate of consecutive corneal transplantation has been reported.12,13 In the present case, corneal edema gradually decreased after conservative treatment even though a flap of detached DM was still visible on AS-OCT (Fig. 6), presumably due to expansion of the endothelial sheet from the apposed areas. In a recent report, Tu performed a small-diameter Descemet’s membrane endothelial keratoplasty in a patient with an inferior DM break and persistent corneal edema, with positive outcome.18 It is important to notice that in addition to the advances in tomography, the new high-definition AS-OCT technology with segmental analysis allowed clinicians to better characterize the anterior and posterior corneal changes that can occur throughout disease progression.

In our patient, visual acuity improved significantly over the 6.5 years of follow-up period as corneal edema disappeared and a fibrotic lesion remained, resulting in an eye with functional vision.

Close monitoring for ectasia progression is crucial for correct decision-making toward keratoconus eyes. Instructing the patient about the deleterious effects of eye rubbing is essential, and the inclusion of such measures (e.g., Violet June campaign) within public health policies would be certainly desirable. In the presented clinical case, avoidance of eye rubbing and topical anti-inflammatory drugs were followed by spontaneous partial regression of the ectasia, delaying the necessity for a more invasive treatment. When progression was documented, TE-CXL was effective in halting disease progression, with topographic stability for more than 6.5 years follow-up period.

Avoidance of deleterious factors like eye rubbing in keratoconic eyes is crucial for clinical stabilization or even improvement. Anti-inflammatory therapy may play a role in ectasia stability.

The study adhered to the tenets of the Declaration of Helsinki. Patient gave written informed consent to the anonymized use of images and clinical information.