Femtosecond Circular Keratotomy in Stage I and II Keratoconus

Aim and objective: Authors present clinical results of circular keratotomy (CTK) performed with a femtosecond laser. The 1–3 years results for two separate groups are the first results of a new surgical approach to stop progression of keratoconus.

Materials and methods: A circular intraparenchymal central 7-mm cut was made with a Ziemer Z6, Z8 femtosecond laser without affecting the epithelium, Bowman layer, Descemet layer and endothelium. Patients with stage I and II keratoconus according to the Krumeich classification were treated.

Conclusion: CKT is a procedure that reliably works in keratoconus stage I and II. Advantages are the ease of the performance using the femtosecond laser and the absence of any severe complication in the eyes treated. The eye remained closed with the consequence that no contact existed from the external world into the cornea.

Keratoconus is a congenital noninfectious progressive disease of the cornea. Eccentric tissue blebs and thinning out of parenchyma bilaterally show when presented. Classification according to the degree of steepening and irregularity is named in four stages. The diagnosis should be confirmed as early as possible. Still no conventional treatment stopping progression in stage I and II is found. Temporary use of contact lenses is the standard procedure to regain better vision but progression is not stopped. Only recently a 7-mm diameter incision circularly around the pupil, circular keratotomy (CKT), was published as an operation to stop progression in stages I and II.

Today various options to stop the progression of keratoconus in its early stages are available.

In 2000 Colin and Simonpoli-Velou introduced intrastromal ring segments, which were inserted into the cornea to improve corneal surface and vision.1

In 2003 corneal collagen cross-linking (CXL) was introduced by Wollensak et al.2 This procedure aims to strengthen the cornea by ultraviolet-A irradiation combined with Riboflavin. Different protocols are available with regard to radiation or amount of riboflavin to be used.2 Although the literature reports on a stable situation in eyes treated compared to control groups, the results failed to prove long-term corneal healing. Detrimental side effects such as the development of cancer around a deep lamellar transplant in a CXL-treated eye discourage the support of this procedure.3

CKT was introduced 2009 by Krumeich and Kezirian following the concept to create a scar to stabilize the diseased tissue in stage I and II.4 In 2016 A 5-years follow up of 51 eyes showed stable radii in 84.3%.5

In 2016 Krumeich et al. presented a modified CKT, in which the cut is performed with a femtosecond laser rather than a trephine.7 In continuation of the 1-year results in the above publication, now 3-year results are presented here.

Keratoconus pathology was assumed to be present if there was visible evidence of double contours representing different refractive indices of front and back of the cornea. These double contours were present even at the very beginning of the disease.

We found that projection of a light circle onto a keratoconic cornea with an ophthalmometric apparatus always produced double images if keratoconic deformations were present. No double images were produced by scars in the cornea or if operations such as penetrating keratoplasty or deep anterior lamellar keratoplasty had been performed.

We used this technique to ensure that our findings and results truly arose from keratoconic origins. In particular, one can use this technique without a long learning curve. Apparently, the reflected image is the result of the different refractive indices of front and back of the conic cornea. This can also be seen at the early stage of the disease. A diagnosis based on double images requires an ophthalmometric device; however, such devices must not possess software that eliminates the weaker of the two images. The effect can be observed if one uses, f.i., the Bausch & Lomb, the Topcon OM4, the Zeiss Bomb or other devices using similar setups. To our knowledge, this is the first publication that uses front-to-back reflections of the measuring light circles thereby detecting keratoconic corneas if such double contours are present. The diagnosis and confirmation of keratoconus is certain also in the very beginning cases (Fig. 1). 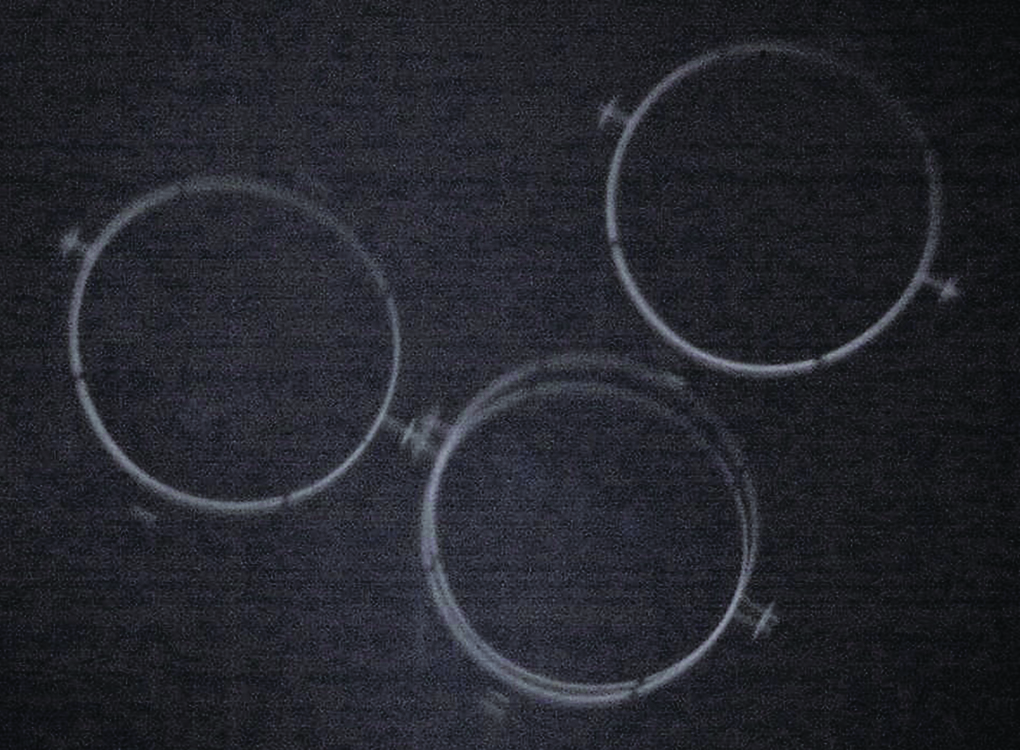 We preferred to use this diagnostic tool knowing that various other approaches are used to thoroughly define and analyze clinical signs and differential diagnosis. Such diagnostic approaches include corneal topography, Scheimpflug image assessment, wavefront analysis, corneal hysteresis and epithelial thickness profiles. Since the double contour technique was shown to be universally applicable and helps prevent surgeons from being seriously misled by misinterpretations, we used this technique for all cases reported in this paper.

Since there is no known difference in corneal wound healing between healthy and keratoconic corneas, we assumed that the generation of an intraparenchymal cut within the conic cornea would create a stable scar. Examples of the stability of corneal parenchymal scars can be seen, for instance, in the stability of refraction of implanted rings in keratoconus eyes.

We decided to use a femtosecond laser cut beneath Bowman’s to exclude Bowman’s membrane from the healing process. The opening of the upper layers would expose the eye to the potentially unsterile outside world. Staying within the corneal parenchyma should therefore limit wound healing to the origin of the cut. Neither Bowman’s nor Descemet’s are touched.

Out of the four available femtosecond lasers, three operate with high energy but with low repetition rates ranging from 40 to 160 kHz INTRALASE, Bausch & Lomb to 500 kHz VISUMAX, Zeiss. We chose the device with the lowest per-pulse energy. This device produced the highest repetition rate of 20.8 MHz, and its per-pulse energy was 10–20 nJ (Ziemer Z6, Z8, Table 1). The laser cuts the tissue from deep to shallow layers, and we found in the retrospective measurements of the first cases, as described in the previous paper that a cutting length of 375 µm from Descemet’s to Bowman’s membranes produced the expected effect. In particular, there was no vision-impairing or vision-reducing effect. All cuts were performed within the center of a 7-mm applanated area.

The angle of the cut within the applanated cornea was steeper than 45° to generate the same effect in all cases, avoiding only separating parallel layers.

There are no data on the traction forces that may be created by the cut. Healing of the tissue seemed to stabilize the surface with no influence on transparency either within the 7-mm zone or in the periphery of the cut.8 Early haze along the cut persisted several weeks but disappeared thereafter, which is different to the known haze that frequently appears after photorefractive keratoplasty.

The duration of the whole procedure was between 30 and 40 seconds.

Preoperative best-corrected visual acuity (BCVA) values were used as a baseline to determine changes in visual acuity, which tend to show up frequently in the immediate postoperative period.

Progression of the cone was defined as follows:

Corneal optical coherence tomography was performed 1 day postoperatively and at every time point during the follow-up to evaluate possible cutting length modifications.

All data were evaluated according to their distributions as determined by the Kolmogorov–Smirnov test. As the data were not normally distributed, nonparametric testing was performed. Categorical data were tested using the Chi-square test, counted data were pairwise compared using the Wilcoxon signed-rank test, and correlation analysis was performed using Spearman’s rank-order correlation. A p <0.05 was considered significant.

Visual acuity data were converted from decimal to log MAR for the calculations.

Because not all eyes were available at every follow-up visit, two parallel evaluations were carried out. The first was for the consistent cohort, where only eyes with complete keratometry data at 1 and 3 years postoperatively were included. The second evaluation was carried out for all eyes with all data available from the follow-up.

In general all patients were satisfied with the operation technique with regard to duration and comfort of the operation.

Wound healing did not generate opacifications within the 7-mm area (Fig. 2).

Fig. 2: Scar formation outside of the 7-mm central area. No change can be seen on the surface of parenchyma

Due to the separation of the tissue by the femtosecond laser blebs, opacifications were insofar different from those produced by a cut. 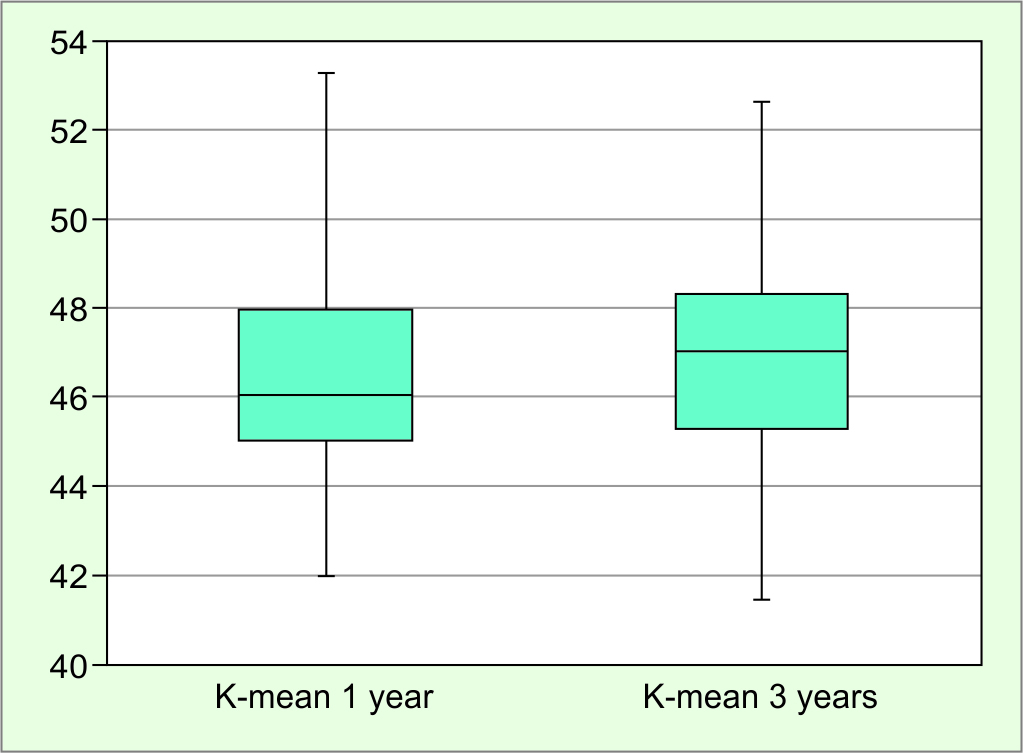 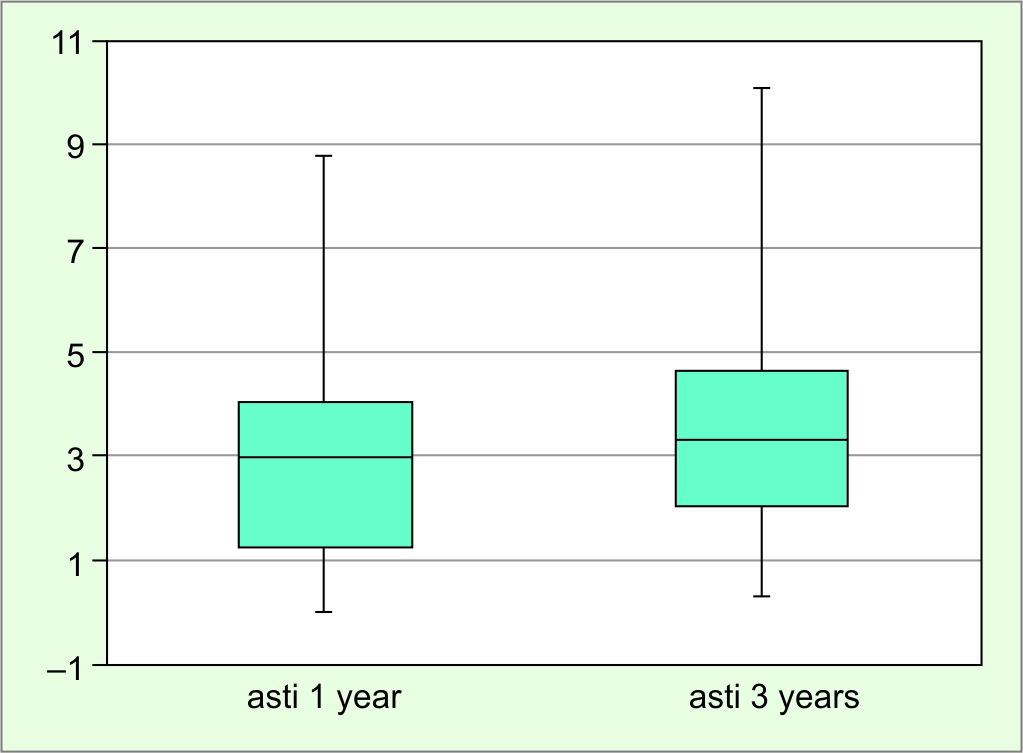 The changes in K-readings and astigmatism values are presented in Figure 5. 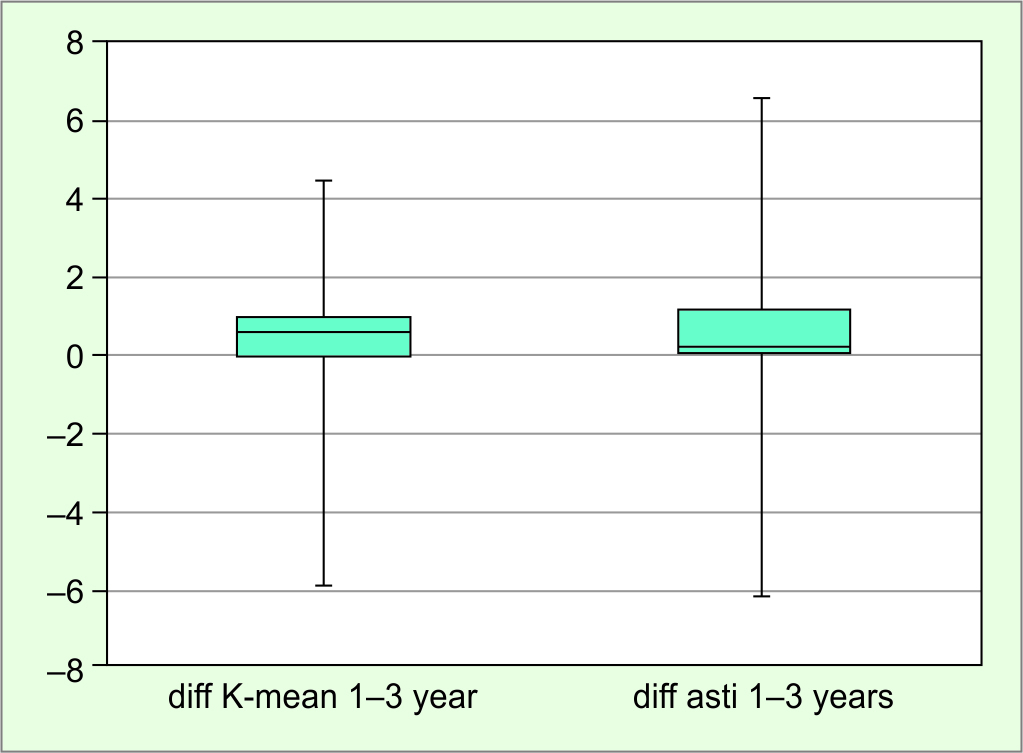 Fig. 5: Changes in K-readings and astigmatism 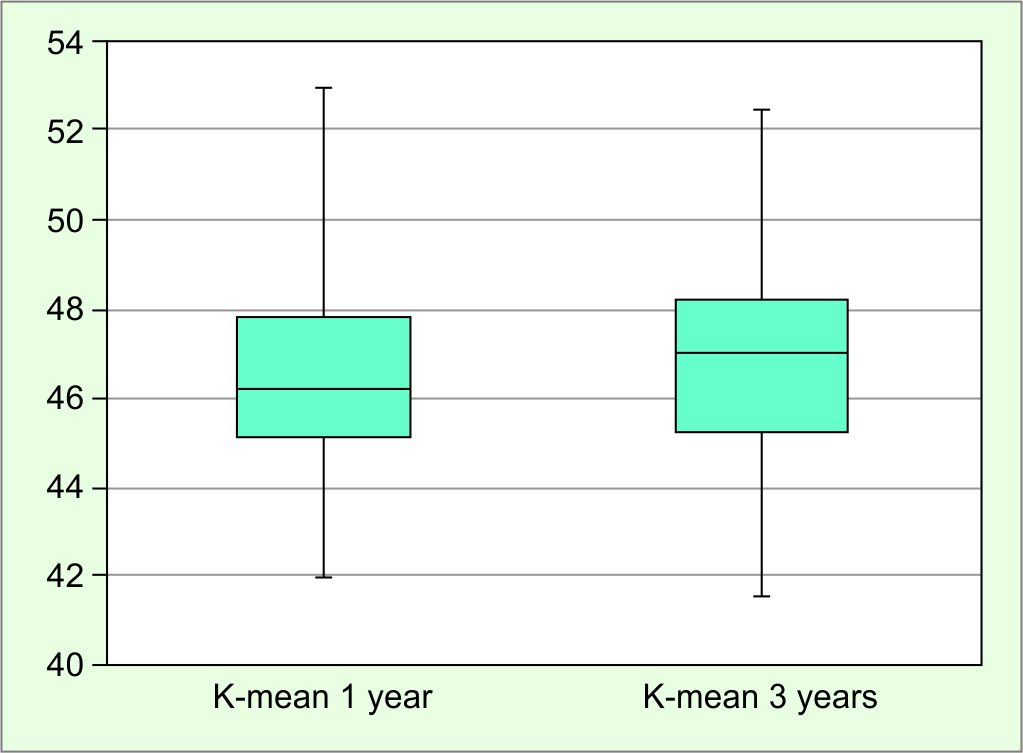 Fig. 6: K-readings values of all data 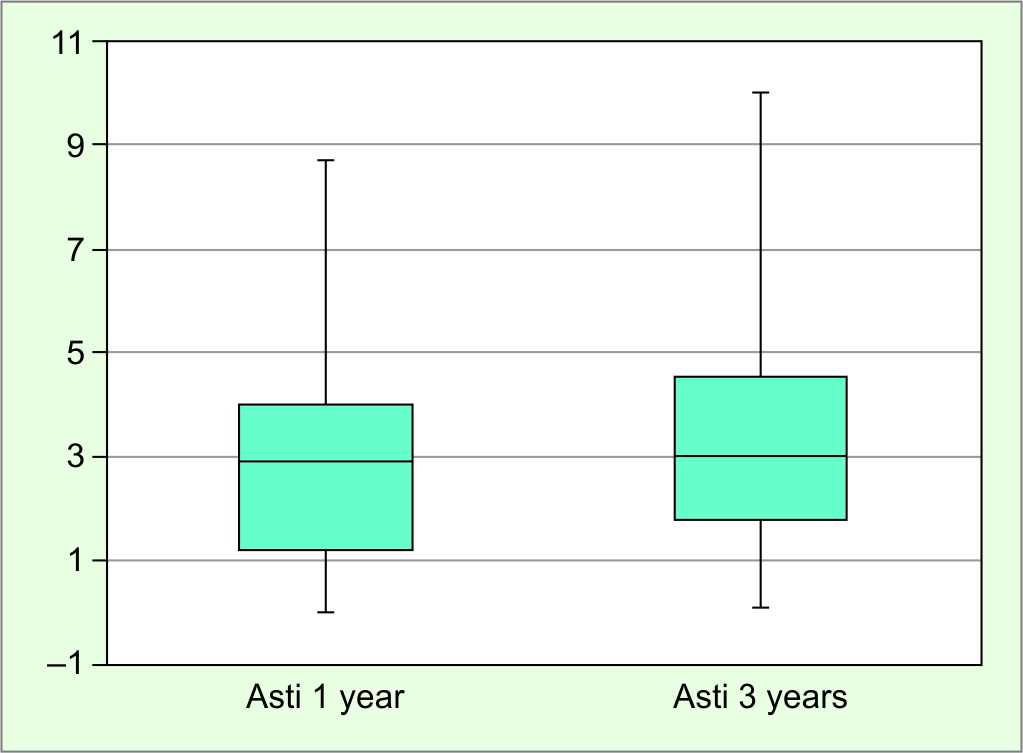 Fig. 7: Astigmatism values of all data

Presently, most measures aim to improve vision by strengthening the thinned-out cornea with different types of intracorneal rings. There is no information on parenchymal healing with a ring itself. Healing in the sense of scarring without loss of transparency still seems out of scope of therapeutic applicability.

Circular keratotomy performed either mechanically or with a femtosecond laser, as presented in this paper, has the principal advantage of limiting the generation of scar tissue to the planned 7-mm zone. Limiting the cut from above Descemet’s to below Bowman’s seems to bring the advantage of a highly transparent scar. Extending the procedure to stage III keratoconic corneas most likely will result in a non-transparent 7-mm circle.

If the femtosecond laser is used, there is no opening of the cornea thereby possibly contacting the outside world. The paper confirms stable radii over 3 years in 87.8% without any notable side effects.