Aim: To present and discuss the outcomes of the mini asymmetric radial keratotomy (MARK) and corneal cross-linking (CXL) combined intervention, also known as the “Rome protocol”, for patients with progressive stage I, II, and III keratoconus (KC) and contact lens intolerance (CLI).

Materials and Methods: The postoperative outcomes of 48 eyes (35 patients) were selected and retrospectively analyzed, with an average follow-up of 3.8 years. To assess the efficacy of the MARK plus CXL combined protocol, mean keratometry, mean pachymetry, and best spectacle-corrected visual acuity were evaluated.

Conclusion: The MARK plus CXL intervention effectively halted the KC progression and improved the visual acuity, which suggests that this combined procedure should be taken into account when considering refractive procedures combined with corneal cross-linking (CXL plus), if the relevant inclusion criteria can be satisfied.

Keratoconus (KC) is one of the most extensively studied pathologies of the human eye. Scholarly described for the first time by Nottingham in 1854,1 it is a noninflammatory corneal ectasia with frequent bilateral onset, which generally manifests itself for the first time in the second decade of life. It results in blurred and distorted vision due to the irregular astigmatism it induces, along with corneal thinning and subsequent corneal protrusion,2 hence the etymology of disease's name (from Greek keratos, “cornea,” and konos, “cone”). Its prevalence is still debated by the biomedical statisticians, with estimates ranging from 0.0003% to 2.34%, and its etiology has been associated with ethnicity, surrounding environment, nutritional habits, eye rubbing, and genetics. More specifically, significant risk factors are younger age, atopy, relevant family history, Down syndrome, Leber congenital amaurosis, Addison's disease, osteogenesis imperfecta, allergic and/or vernal keratoconjunctivitis, retinopathy of prematurity, retinitis pigmentosa, and others.3

The history of KC treatment is long and debated, in consideration of the fact that in 15–20% of cases corneal transplantation may be required due to excessive corneal thinning and scarring. Such procedure can involve a full-thickness graft (penetrating keratoplasty, PKP) or a graft of selected corneal layers (deep anterior lamellar keratoplasty, DALK). The latter results in fewer cases of rejection, and the former provides better postoperative visual acuity.4 Concurrently, since the emergence of refractive surgery, alternative surgical options have been tested, and the current surgical spectrum for the ophthalmic surgeons who treat KC is relatively wide and strongly research-guided. Treatment options comprise corneal cross-linking (CXL, the gold standard in KC treatment in its many variants),5 intracorneal ring segments (ICRS),6 mini asymmetric radial keratotomy (MARK),7 circular keratotomy (CK),8 radial and mini-radial keratotomy (RK and mini-RK),9,10 and conductive keratoplasty (CKP).11 Moreover, given the predominantly refractive nature of many of these treatments, some of them have been performed in combination with CXL, in a series of combined procedures that is now commonly known as “cross-linking plus” (CXL plus). The latter refers to CXL performed with ICRS,12 photorefractive keratectomy (PRK, the “Athens protocol”),13 laser in situ keratomileusis (LASIK),14 MARK (the “Rome protocol”),15 CKP,16 and phakic intraocular lenses (PIOLs),17 depending on the case at hand.

Despite the high levels of safety in performing CXL, and notwithstanding its effectiveness in halting KC permanently if performed with epithelium removal (epi-off), the primary outcome of CXL is not a refractive improvement. The latter has been quantified in an average reduction of 1.2 D in mean keratometry (Kavg) and a visual improvement of 0.1 logMAR,18,19 which, although welcome by patients and ophthalmologists, may require further options in order to improve visual acuity.

The aim of this study is to present and evaluate the effectiveness and the durability of the combined MARK plus CXL procedure (the “Rome protocol”), in addressing both the degenerative effects of KC (corneal bulging and corneal thinning) and the vision loss it brings. MARK was developed in 1993 by the author (M.A.) as a conservative alternative to PKP, and CXL has been routinely performed by the same author since 2005. The relevant long-term data (6.9 years on average) have been discussed elsewhere and have shown promising results,20 while this study assesses all of the data at our disposal, regardless of the length of follow-up.

This is a retrospective observational study which included 48 eyes of 35 patients, all of which underwent both MARK and CXL, performed by the same surgeon (M.A.), with the same instruments in two different centers. Preoperative demographic data show that the mean age at the time of intervention was 37.8 years (range 14–58), while the cohort of patients consisted of 25 males and 10 females. The average follow-up period is 3.8 years (range 1–14).

Inclusion criteria for the combined intervention were progressive KC classified as stage I, II, or III (Amsler-Krumeich classification), and CLI. Exclusion criteria were chronic or recurrent ocular infections. All patients underwent a complete clinical examination before the intervention—which was conducted in accordance with the Declaration of Helsinki—and the ethics approval was assessed by the director of the two centers (MA). A written informed consent for both the procedures was required as a part of our preoperative routine.

As the purpose of this study is to ascertain the effectiveness of the Rome protocol in treating KC as well as in improving visual acuity, three main parameters have been taken into account. Two concern the actual treatment of KC, thus investigating whether the combined intervention halts corneal bulging and corneal thinning, and one examines visual improvement. Subsequently, the three outcome parameters that have been selected are mean keratometry (Kavg), mean pachymetry, and best spectacle-corrected visual acuity (BSCVA). All data were collected in standardized study spreadsheets and entered into Excel 2019 (Microsoft Corporation, Redmond, Washington), which also provided graphical representations and basic statistical outcomes, and visual acuity was measured according to a decimal scale and then converted to the logarithm of the minimum angle of resolution (LogMAR).

MARK was originally conceived as a hybrid technique, a surgical synthesis of two older procedures. They are asymmetric RK21—already using sectorial incisions but too prone to hyperopic overcorrection given the long incisions—and mini-RK, less invasive but still applying incisions on the full corneal angular span. MARK's conservative nomogram is based on Lindstrom's22 but it was modified by the author (M.A.) so that it performs shorter (1.75–2.25 mm instead of 3 mm) and asymmetric (sectorial) mini incisions (Fig. 1). Further, the differences between MARK incisions and standard RK, asymmetrical radial keratotomy (ARK), or mini-RK incisions are very significant, especially when treating a degenerative pathology, such as KC, since MARK surgery: 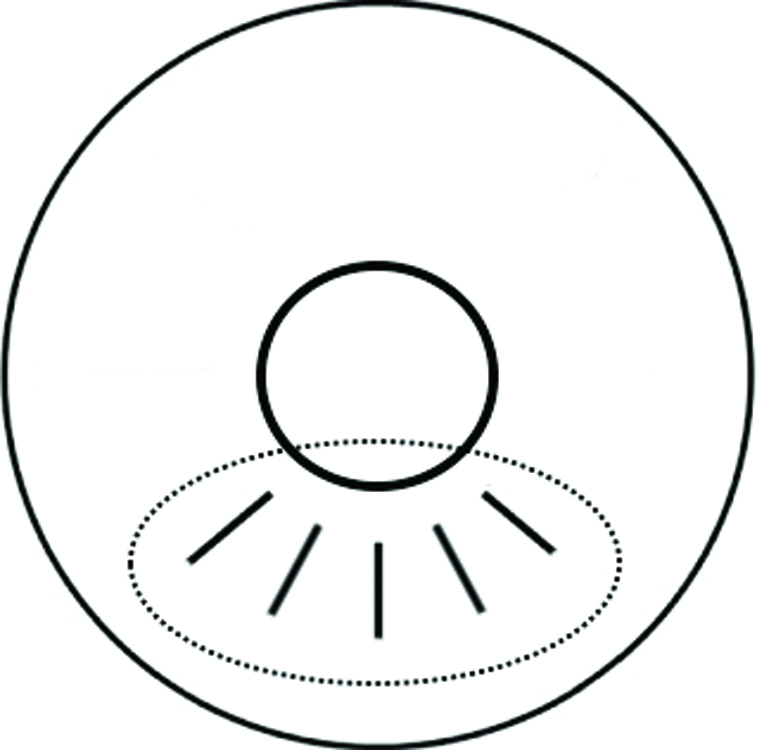 Fig. 1: A diagram of typical MARK mini incisions, performed only on the corneal sector affected by KC

Once the inclusion/exclusion criteria are satisfied, preparation for MARK starts by devising its surgical plan. Since it consists of a small series (3–5) of tomography- and topography-guided centripetal mini incisions, performed only on the portion of the cornea where KC is manifest at circa 80% of corneal thickness, factors that are carefully considered included the designation of the clear corneal zone, which is to be left as large as possible, along with the determination of the number, position, length, and depth of such mini incisions. A diamond knife (Meyco, Anton Meyer & Co. Ltd, Biel, Switzerland) and custom-made double concentric corneal markers, limiting the incisions to a maximum of 7.5–8 mm on the external end and a minimum of 3.5–4 mm on the internal end, are used. Topical anesthesia is applied before the operation (benoxinate chloride 0.4%). Following the intervention, a bandage contact lens is placed, and topical antibiotics (levofloxacin hemihydrate 0.5%) and non-steroidal anti-inflammatory drops (diclofenac sodic 0.1%) are prescribed.

After repeating the same series of examinations described above, a preoperative therapy based on non-steroidal anti-inflammatory eye drops (indomethacin 0.1%), which are known to effectively prevent and control the average of haze and alleviate postoperative irritation and discomfort,23 was prescribed for 3 days prior to the intervention. CXL was then performed only when complete healing of the mini incisions was observed with biomicroscopy—on average 13 months later—in order to avoid possible reopening of such mini incisions during the treatment. Although all of our current CXL procedures involve accelerated corneal cross-linking (A-CXL) with epithelium removal, all eyes included in the Rome protocol underwent the standard Dresden protocol. 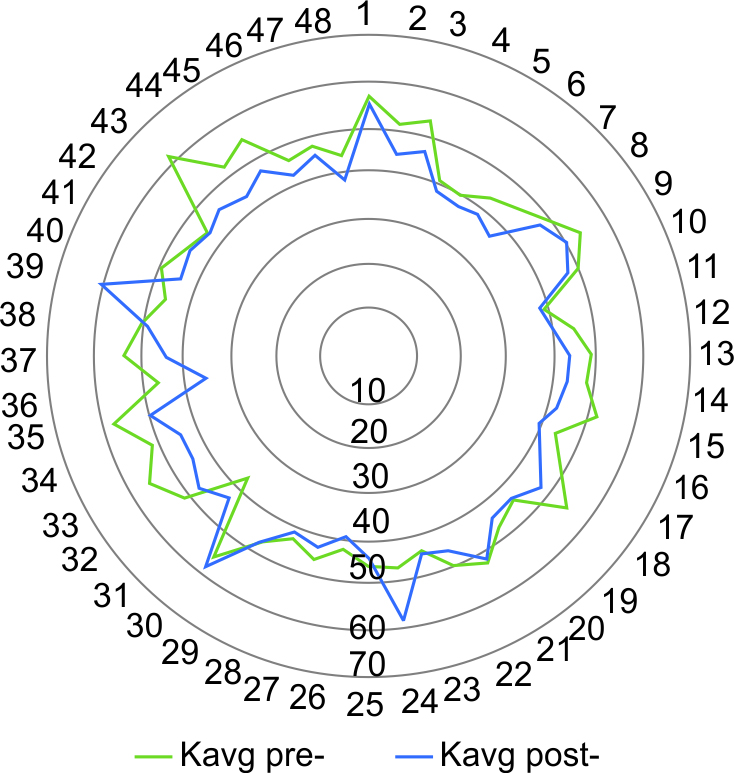 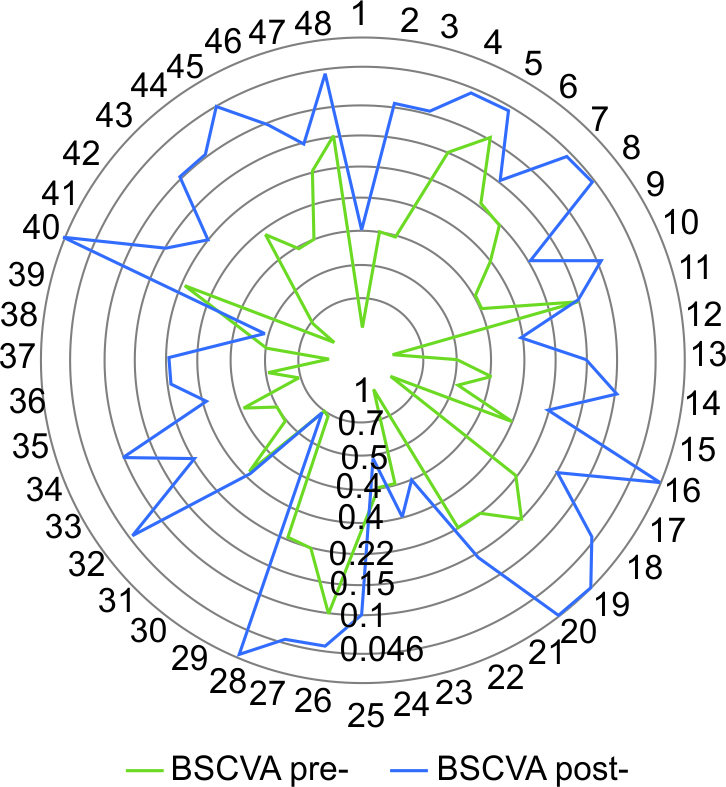 Figs. 5A and B: Axial map of the left and right eye before the combined intervention

Figs. 6A and B: Axial map of the left and right eye following the combined intervention, 13.5 years later

No intraoperative or postoperative complications occurred. Corneal micro-perforations, potentially occurring during M kml ARK, did not take place. Some patients experienced minor postoperative discomfort due to a perceived foreign body sensation, common to a number of corneal procedures, as well as blurriness after the removal of the bandage contact lens, which progressively disappeared. CXL-associated corneal haze occurred very rarely and rapidly disappeared, also due to the preoperative therapy based on non-steroidal anti-inflammatory eye drops.

These data allow for a number of considerations. The MARK plus CXL intervention has effectively improved corneal bulging and corneal thinning in 90% and 83% of cases respectively, thus not only halting KC progression but also improving tomographic indicators that are relevant to this corneal ectasia. Second, it has improved visual acuity in all cases, thus justifying the CXL plus rationale of this particular combined procedure. Third, the average follow-up for these results is a solid 3.8 years, and such results are consistent with the long-term results presented elsewhere with reference to both the Rome protocol15,20 and the MARK alone.24 Fourth, both procedures do not prevent more invasive surgery, such as PKP or DALK, should the ectasia continue to progress in other cases.

At the same time, it is important to acknowledge some limitations concerning the Rome protocol. First, while CXL is a common and standardized procedure, MARK is not, and it therefore requires an ophthalmic surgeon with experience in both incisional surgery and KC management. Second, the number of ophthalmic surgeons that are comfortable with performing corneal incisions is decreasing due to the “bad reputation” of aggressive RK performed in the past,25 as well as the relatively high difficulty and relatively long learning curve involved. To this, one might add that the current treatment spectrum provided by the CXL plus niche allows for a number of alternatives.

However, as discussed in the literature, every CXL-combined protocol has precise indications and limitations,26 which brings us to the conclusion that the more options the ophthalmic surgeon has, the better it is for their patients with progressive KC and CLI. In conclusion, we wish to stress the importance of prevention, as an early diagnosis would likely result in an early-stage CXL, which would probably prevent the need for further surgery. When this is not the case, nevertheless, the results presented by this study suggest that the MARK plus CXL protocol should be taken into account when considering CXL plus treatment options, if the inclusion criteria that have been mentioned above can be satisfied.

© Jaypee Brothers Medical Publishers. 2019 Open Access This article is distributed under the terms of the Creative Commons Attribution 4.0 International License (https://creativecommons.org/licenses/by-nc/4.0/), which permits unrestricted use, distribution, and non-commercial reproduction in any medium, provided you give appropriate credit to the original author(s) and the source, provide a link to the Creative Commons license, and indicate if changes were made. The Creative Commons Public Domain Dedication waiver (http://creativecommons.org/publicdomain/zero/1.0/) applies to the data made available in this article, unless otherwise stated.